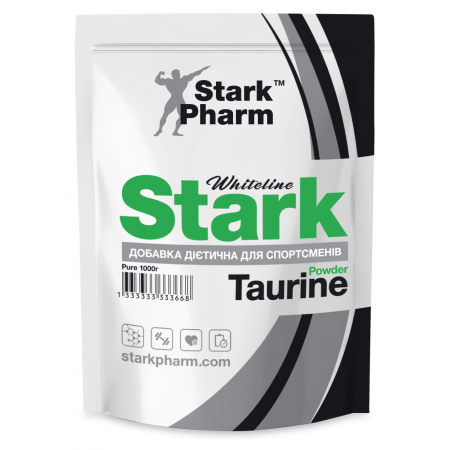 Taurine as a sports supplement is necessary for the normal functioning of skeletal muscles.

Recently, it has been established that in the brain, taurine plays the role of a neurotransmitter amino acid that inhibits synaptic transmission. In a large dosage - inhibition of nervous processes, sedative, anticonvulsant effect. In small ones - stimulating (included in Bull energy drinks).

Taurine relieves stress and muscle tension. It restores the energy of nerve cells to such an extent that memory, attention, and mood improve dramatically (anger and irritability disappear).

Taurine controls the functioning of cell membranes, keeping potassium and magnesium inside the cells, and excess sodium outside. Thus, it acts as a diuretic. But unlike potent diuretic drugs, taurine is not a cellular poison. It does not damage the kidneys.

Taurine is the best remedy for all conditions that need to reduce fluid accumulation, including heart failure and liver disease. Even on those innocuous occasions when you get a little swollen, like after a long plane trip or when your period is approaching, a few doses of taurine will do the trick. This is far more than can be said for pharmaceutical diuretics, which in recent years have been accused of causing the same water retention and tissue swelling that they were originally intended to relieve.

In contrast, the "side effects" of taurine boil down to its additional benefits.

If you take taurine with a break of no more than 6 hours between doses, then another property of this unique amino acid is found - to reduce appetite.

Taurine has a moderately pronounced direct cardiotonic effect, due not only to the preservation of myocardial energy resources necessary for the contraction process, but also to a direct effect on myocardial contractile proteins, increases the content of ionized calcium in myocardial cells and at the same time prevents overload of mitochondria with calcium ions.

It prevents the excretion of potassium from the heart muscle and therefore contributes to the prevention of heart rhythm disturbances.

Improves blood circulation and prevents thrombosis due to antiplatelet effect.

It has an alpha-adrenergic blocking effect, which is manifested by the vasodilating effect of taurine and its effectiveness in the treatment of prostate adenoma.

The most studied function of taurine is its role in the production of bile salts. The main way the body gets rid of excess cholesterol is by using it to produce bile. Bile is made up primarily of cholesterol, which is produced in the liver and stored in the gallbladder.

Bile promotes the absorption of fats, reducing their amount and making it easier for digestive enzymes to process fat.

However, bile is not soluble enough if it is not conjugated, that is, not combined with other substances. In this case, it turns into bile salts. The main conjugating agents are glycine and taurine.

In the presence of taurine, bile remains in a liquid state and is less likely to form gallstones. This is especially important for those who have had their gallbladder surgically removed or whose liver may not be working optimally.

Being a sulfur-containing amino acid, taurine helps to normalize the function of cell membranes and improve metabolic processes.

Taurine as a sports supplement is necessary for the normal functioning of skeletal muscles. This was demonstrated in 2004 in a study on mice genetically deficient in taurine. They had almost complete wasting of skeletal and cardiac muscles.

Recently, cosmetic compositions containing taurine have been introduced, possibly due to its antifibrotic properties. It also helps keep the skin hydrated.

In Ukraine, taurine is used as part of eye drops for the treatment of degenerative diseases of the retina and penetrating wounds of the cornea, however, research results indicate the need for wider clinical use.

In a seven-week experiment, scientists observed the effects of taurine consumption of 3 g per day in thirty overweight students. Part of the group received a placebo. Taurine lowered the level of triglycerides in the blood and improved the atherogenic index (the ratio of LDL to HDL). Taurine increased the production of beneficial lipoproteins (high density).

In addition, students who took taurine showed a positive side effect, namely, a decrease in the amount of subcutaneous fat. Experiments on rats have shown that taurine prevents the accumulation of abdominal fat, considered the most dangerous to health and associated with insulin resistance, heart disease and diabetes.

* under the hill means a mound of 1 mm above the level of the measuring spoon.

Additional recommendations: It is especially recommended to take L-taurine together with AAKG (5 g) and concentrated creatine (0.5 g per 30 kg of body weight) 60 minutes before the start of training.

Do not exceed the recommended dose.

Store in a tightly closed container in a cool, dry place out of the reach of children.

Best before: indicated on the package.

You can buy Taurine Stark Pharm - Stark Taurine (1000 grams) with delivery in Kiev and Ukraine in our online store of sports nutrition and accessories at low prices by using the order form on the website around the clock or by calling us at the phone numbers listed in the contacts section.

Write a Review
Based on 0 reviews -

0/5
No reviews for the product

Be the first to write your review !