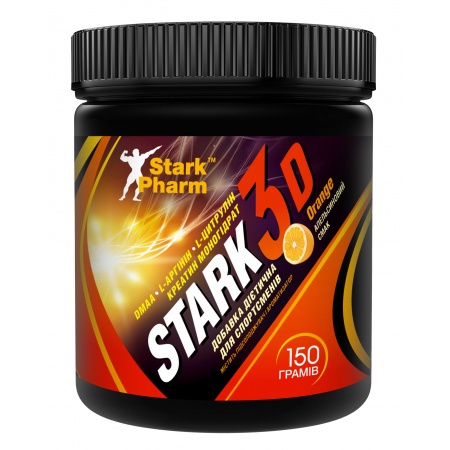 Stark 3D from Stark Pharm is an innovative sports complex to increase the effectiveness of your workout.

Notify me when available

Stark 3D from Stark Pharm is an innovative sports drug on the Ukrainian market of sports supplements.

Supplement for productive weight training. A pre-workout that outperforms even Jack 3D (according to our loyal customers who tried the old Geranium Jack). The effect is achieved through the coordinated interaction of the components.

Arginine alpha-ketoglutarate (AAKG) is an active nitrogen donator with a vasodilating effect during pump training. In addition, AAKG promotes the synthesis of somatotropic hormone in a natural way, which accelerates the process of gaining dry mass against the background of a decrease in the percentage of subcutaneous fat.

Arginine is involved in the production of anabolic hormones and is a precursor of nitric oxide. It improves muscle nutrition, strengthens the immune system, and also significantly increases well-being and endurance. In addition, arginine in combination with creatine gives a tremendous effect in terms of strength endurance.

Citrulline malate is a unique amino acid that promotes the synthesis of many conditionally essential and non-essential amino acids, and is also an intermediate metabolite in the utilization of a toxic substance, ammonia. Eliminates fatigue, leads to the peak of the maximum - removes the threshold of fatigue and pain (burning) from the formation of lactate.

Beta-alanine is a naturally occurring amino acid that increases levels of carnosine (a dipeptide) – a buffer that prevents acidification, which allows you to do more reps in a set and increase muscle size.

Caffeine is a central nervous system stimulant that significantly improves performance and mental focus. In addition, caffeine promotes the production of adrenaline, a hormone that converts fat stores into energy.

Geranamine (DMAA) is a stimulant that has no equal. A few minutes after use, an increase in the psycho-emotional state and general mood is noted. Strength and speed-strength indicators are noticeably increased, and lipolysis is also activated.

Rhodiola rosea (extract) is an adaptogen with a pronounced stimulating effect, which increases endurance and performance during training. Rhodiola also strengthens the immune system and reduces recovery time after grueling workouts. Significantly increases the effectiveness of all of the above components.

Ginseng - included in the composition in order to increase strength and endurance, as it allows you to cope with serious stress. As you know, any training for the body is stressful. Ginseng is one of the most tested and recognized adaptogens in the world.

L-theanine is a natural relaxant, in small doses it increases mental focus and the desire to work. By "relaxant" we mean not physical relaxation, but mental relaxation. As often happens, thoughts about work or study do not allow you to concentrate on training. For this, Theanine is included in Stark 3D.

Eleutherococcus is a powerful adaptogen, even a single use of which helps to increase the body's performance, activate tone and increase endurance.

Directions for use of Stark 3D Stark Pharm

To prepare a pre-workout shake, you need to take 1-3 scoops of the powder mixture and mix with water - 200-300 ml of water or juice. If you are new to geranium extract supplementation, one scoop is enough for your first shake to see how geranamine works for you. It is not recommended to take the supplement before crossfit or wrestling classes, as there is a strong pumping effect.

You can buy Stark 3D pre-workout complex from Stark Pharm in Kiev or Ukraine on our sports nutrition website.

Write a Review
Based on 3 reviews -