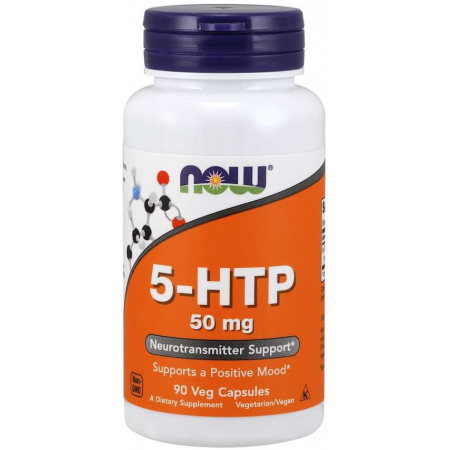 5-HTP acts as a non-drug antidepressant.

Now Foods 5-HTP contains 5-HTP (5-hydroxytryptophan), an intermediate metabolite between the amino acid L-tryptophan and serotonin, derived from the seeds of the African plant Griffonia simplicifolia.

5-hydroxytryptophan is an amino acid that, when it enters the brain, increases the ability of transmitting neurons to create serotonin, one of the most important neurotransmitters. Serotonin is produced in neurons that form the median sulcus of the brainstem. It is then injected into numerous areas of the brain, including the spinal cord, cerebellum, hypothalamus, limbic system, and cerebral cortex.

5-HTP restores the necessary concentration of serotonin in the synaptic clefts, supports the serotonergic system of nerve impulse transmission no less effectively than selective serotonin reuptake inhibitors, but does not have the side effects of the latter. In the central nervous system, serotonin is involved in signaling that affects mood, sleep and arousal, satiety, cardiovascular regulation, temperature control, arousal, and depression.

5-HTP acts as a non-drug antidepressant. In the peripheral nervous system, serotonin acts on the gastrointestinal tract, respiratory tract, and genitourinary system.

1 serving (1 capsule) daily, preferably on an empty stomach at bedtime.

Do not exceed the recommended dose.

Store in a tightly closed container in a cool, dry place out of the reach of children.

Best before: indicated on the package.

You can buy Now Foods Relaxant - 5-HTP 50 mg with delivery in Kiev and Ukraine in our online store of sports nutrition and accessories at low prices by using the order form on the website around the clock or by calling us at the phone numbers listed in the contacts section.

Write a Review
Based on 1 review -