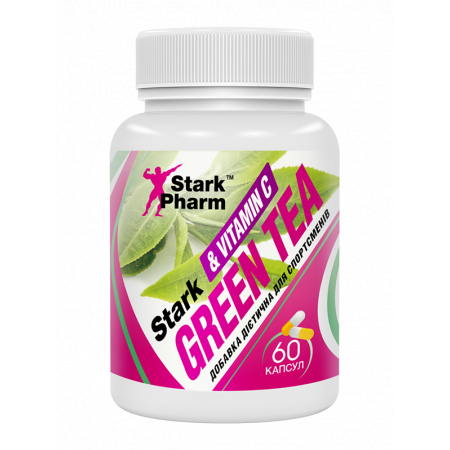 Notify me when available

Green Tea + Vit C Stark Pharm (flavonoids, EGCG, 95% polyphenols) is a universal synergistic combination of two components: green tea extract + vitamin C. In addition to the fat-burning effect, the supplement has stimulating and antioxidant properties. That is, in addition to reducing body weight due to fat, using this product, the athlete cleanses the body of free radicals and other toxic substances formed during heavy physical exertion.

Green tea extract is more classified as a thermogenic , but is milder than products with similar properties. Vitamin C strengthens the immune and cardiovascular systems. Each of the components is a powerful antioxidant, but in combination these substances give a tremendous effect in terms of weight loss due to fat, cleansing of toxins, as well as accelerated recovery processes after heavy training. Green Tea + Vit C Stark Pharm should not be confused with pharmaceutical preparations. In most cases, vitamins from a pharmacy are weaker in concentration, and the raw materials from which they are made are not always suitable for athletes or people who lead an active lifestyle.

Green Tea + Vit C normalizes metabolic processes in the body, which is also an important factor on the way to fat burning. Everything consumed, even simple carbohydrates, is converted into energy, not fat. It is important that the improvement of metabolic processes occurs naturally for the body, that is, the root cause is eliminated, and not the consequences.

The biological value of green tea extract is primarily determined by the high content of polyphenolic compounds of catechins (including tannins), caffeine, and vitamins (C, P, K, etc.).

The most significant catechin compound in terms of its effect on thermogenesis is epigallocatechin gallate, also known as EGCG. Studies show that the polyphenol catechin has antioxidant properties, its intake reduces the risk of cardiovascular diseases.

Caffeine in tea (theine) is present in a bound state with tannins , the natural combination of caffeine with tannins provides a safer and milder effect on the body, largely leveling the side effects of the latter.

In addition, it has been suggested that green tea can increase the energy consumption of the body by involving brown adipose tissue in thermogenesis. In support of this theory, Dallu et al report that taking green tea extract with caffeine (50 mg caffeine and 90 mg epigallocatechin gallate 3 times a day) significantly increases daily energy expenditure and fat utilization in humans compared with caffeine alone. Thus, a synergistic effect can be assumed here. In a recently published paper, DiPierro and colleagues found that supplementing a low-calorie diet with green tea extract resulted in greater weight loss (14 kg vs. 5 kg) compared to a conventional low-calorie diet. This experiment was carried out for 90 days.

3. Di Pierro F, Menghi AB, Barreca A, Lucarelli M, Calandrelli A: Greenselect Phytosome as an adjunct to a low-calorie diet for treatment of obesity: a clinical trial. Altern Med Rev 2009, 14(2):154-60.

Recommendations for use on training days

In the morning and half an hour before the start of physical activity. On recovery days - only in the morning. It is not recommended to take the drug on an empty stomach.

Buy Green Tea + Vit C from Stark Pharm at the most affordable price we offer on our sports nutrition website.

Write a Review
Based on 0 reviews -

0/5
No reviews for the product

Be the first to write your review !