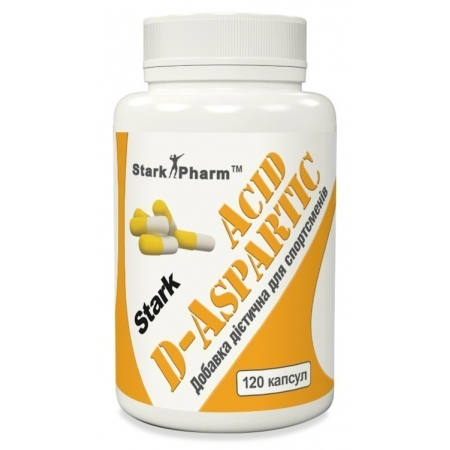 An endogenous amino acid that is present in the body of all vertebrates and invertebrates. D-aspartic acid plays an important role in the functioning and development of the nervous system. During the embryonic stage of development, an increase in the concentration of this substance in the brain and retina is observed.

D-aspartic acid is also a neurotransmitter that transmits nerve impulses from one neuron to another. In addition, it increases the level of cyclic AMP in nerve cells and is transported from the synaptic cleft of nerve cells by a special carrier.

It has recently been discovered that this amino acid is involved in the regulation of the endocrine system, it regulates the release of certain hormones. An important discovery in bodybuilding was the property of D-aspartic acid to interact with certain parts of the hypothalamus, which leads to increased secretion of gonadotropin-releasing hormone, which in turn enhances the production of gonadotropin. The latter also increases the production of testosterone - the main anabolic hormone.

In addition, this amino acid enhances the secretion of prolactin and growth hormone. The scientists also found that D-aspartic acid is involved in the release of testosterone and progesterone by the testicles.

The first data on the ability to increase testosterone production were obtained on white laboratory rats, however, a human study was recently performed, which confirmed the effectiveness of D-aspartic acid in humans.

It should be noted that all of the above properties are characteristic only of the D isomer of aspartic acid, while all proteins and amino acids offered in sports nutrition stores contain the L-form. Interestingly, the L-form is able to be converted into the D-form in the body, however, additional consumption of the L-form does not lead to an increase in testosterone concentration.

The scientists also found that the concentration of DAA in the brain gradually increases until the age of 35, and then begins to decline. The same is observed with testosterone levels.

D-aspartic acid has caused a significant stir in the bodybuilding world. While in Russia they are just beginning to learn about it, in the West, athletes are already actively using this supplement. The effectiveness of the supplement is confirmed by the reports of athletes (growing strength, increased libido and other signs of increased testosterone levels), some of them performed a testosterone level analysis before and after use. The data obtained confirms the results of studies: testosterone does increase.

D-aspartic acid is taken at a dose of 3 grams per day, divided into 3 doses, for 4-5 weeks. The serving is 2 capsules. The first serving immediately after sleep (can be washed down with a protein shake or consumed with breakfast), subsequent? day before meals.

The maximum course of admission is 12 weeks, after which it is necessary to take a break for 4 weeks (to restore the natural hormonal balance in the body).

There are no side effects according to a wide range of studies.

Reviews on D-aspartic acid (DAA) are presented in a number of cutting-edge authoritative studies.

Write a Review
Based on 1 review -